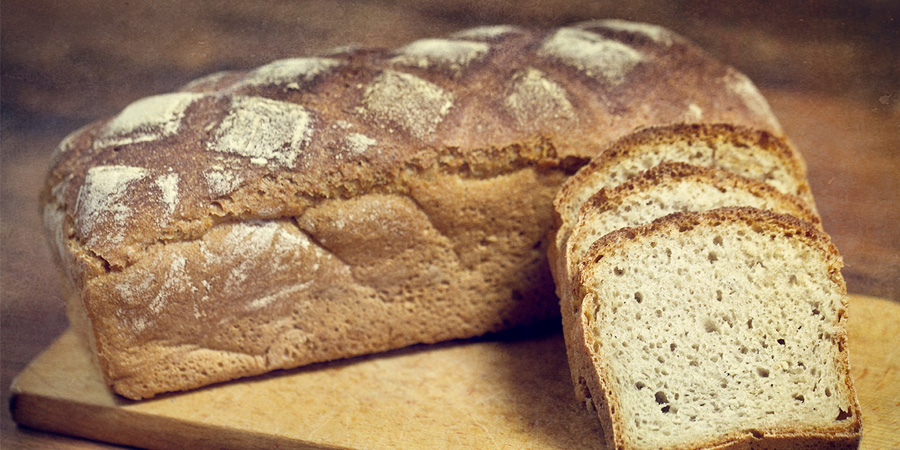 During your stay in Bydgoszcz, it’s worth finding time to try local specialties. There is something for everyone, including chocolates, goose meat, locally brewed beer, and bread with potatoes …

Did you know that...
While writing of sweets, we need to mention Bydgoszcz ice cream. For many years, in many polls, Bydgoszcz residents almost unanimously recommended Café Primo ice cream shop (18 Gdańska Street, the narrow access to the Kazimierz Wielki Park), with one special ice cream in the Bydgoszcz flavour.

Sweet history The love of Bydgoszcz residents for sweets started before the First World War. Elegant, family-owned cake shops and bakeries were opened in the city centre. They were serving tasty and always fresh Danish pastries, cream puffs made from choux pastry, and flummery. At home, people delighted in the taste of chocolates made by the “Lukullus” Sugar and Chocolate Factory and the Tysler Brothers (both of them were nationalized after the Second World War, merged and named “Jutrzenka”, which has been operating under this name to this day). 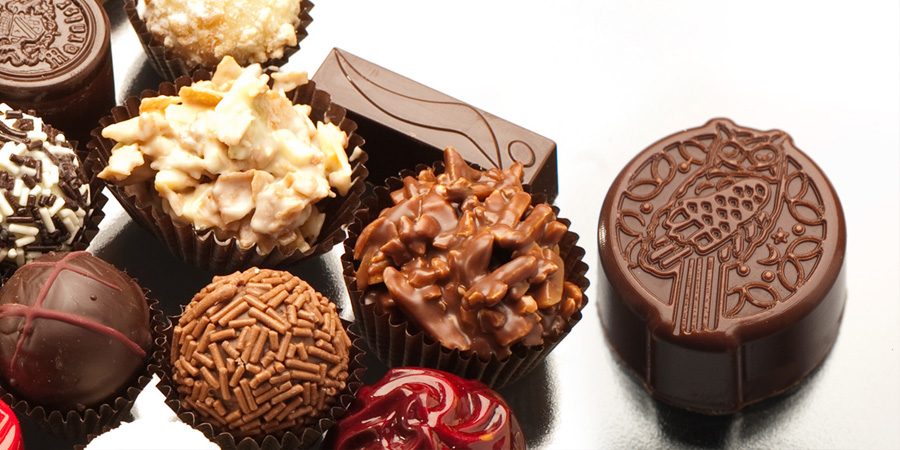 Chocolates and baked goods made by Sowa “Adam Sowa,” a family-owned confectionery company founded in 1946, popular among Bydgoszcz residents, has become one of the tourist stops on the “sweet” map of the city. One of the attractions is the handmade chocolates, known for their unique flavour. Their secret is a thin layer of chocolate, underneath which is an aromatic, liquid ganache (filling). Residents and tourists also delight in cakes and layer cakes, which were the specialty of master baker Feliks Sowa, the founder of the company. In 1962, he made the first “flagship” chocolate layer cake in his bakery. Sponge cake, layered with jam and covered completely with melted milk chocolate set popularity records. While visiting the coffee house at 5 Mostowa Street, we can try a cup of house coffee – “Sowa Café” and take a look at reprints of photographs of old Bydgoszcz, taken a hundred years ago.

Potato rye bread is one of the oldest culinary recipes from the Bydgoszcz area. In the past, bread was baked from flour processed at a farm or purchased from the mill. It was rather expensive. On the other hand, the basic nutrition of the local residents was based on cheap and generally available potatoes. Clever housewives quickly noticed that adding boiled and mashed potatoes to the bread dough increases the number of baked loaves and improves the taste of the bread. In addition, they reduced the perishability of the bread and extended its freshness. Today, the only establishment that preserves these old traditions is the Bydgoszcz bakery Murmiłło. Potato rye bread has a crispy, golden brown crust and is soft inside, having a flavour and aroma of roasted potatoes. The time of preparation of this bread is very long, 22 hours; its baking time is 1.5 hours. Thanks to its unique features and long history, the bread was registered on the list of traditional products of the Ministry of Agriculture and Rural Development. It can be purchased in the regional meat delicatessen, JD Spychalscy, at 6 Batorego Street (while stopping at this shop, we recommend trying one of the house hams made using traditional methods), in the Murmiłło company store at 60 Sienkiewicza Street, and at Zimmer Café, 7 Gdańska Street.

Did you know that... For many decades, the recipe of the potato rye bread was passed around by word of mouth. The recipe was finally written down for the first time in 1831 in the “Education for Peasants”, and later in 1915, in the “Cookbook for the Polish Nation”.

Frymark is a cyclical market with organic, regional and artisanal products, which is organized every Sunday (except on public holidays) in the center of Bydgoszcz (Gdańska 8, on the square in front of Bydgoskie Centrum Finansowe).

From 10 a.m. to 2 p.m. you can taste some food and buy products from the local food producers.

Goose meat
Recently, the old-Polish traditions of eating goose meat have been restored in Kuyavia and Pomerania. It’s not surprising, since the region is one of the biggest producers of this tasty meat that has been underestimated. The interest in goose meat is noticeable in particular in November, on the Feast of Saint Martin observed on November 11. This time is not accidental, since as early as the 19th century goose breeding was seasonal and lasted between spring and late autumn, with slaughter carried out just before November 11. On the Feast of Saint Martin (the patron saint of birds, particularly geese), people ate roast goose, sweetly flavoured (with fruit). For winter, goose meat was seasoned (chopped, raw meat that was ripened) and cured (marinated and smoked goose breasts). The latter were registered on the list of traditional products of the Ministry of Agriculture and Rural Development. Roast goose with fruit, cured goose meat, goose liver pate, and soup made from goose blood called “Czernina” are delicious meals
that can be tasted at the “Goose Meat Trail”. 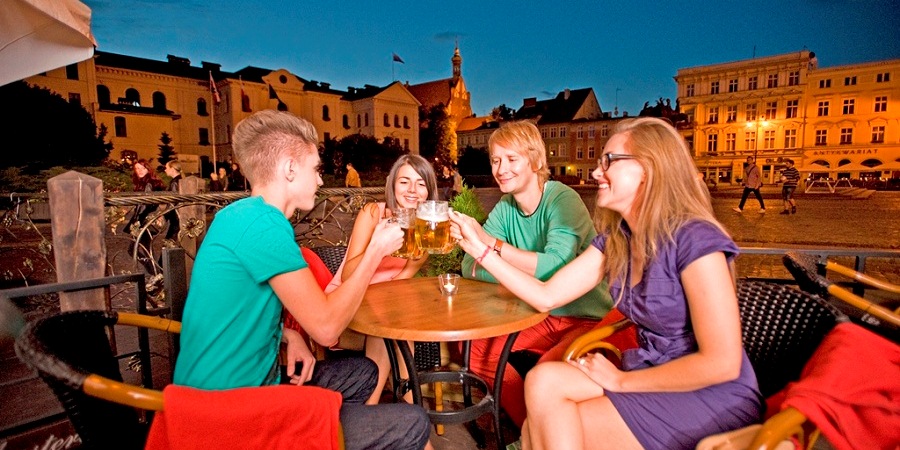 Beer from the local brewery
The traditions of Bydgoszcz brewing date back to the origins of the city. In the 14th century, every townsman, owner of a lot within the city walls, had the right to brew and sell beer. Bydgoszcz beer was served in inns, in the area stretching from Wielkopolska to the Baltic Sea. In the following century, this gold beverage, due to its exceptional taste, was one of six in the country exported abroad. This boom continued until the mid-17th century. In addition to the castle brewery, brewhouses operated in local inns and taverns. At the turn of the 20th century, Bydgoszcz had as many as 13 breweries. The biggest of them, Juliusz Strelow’s brewery in Ustronie Street, set a record in filling bottles at 1,800 an hour in 1920. After the war, his property was nationalized and turned into a facility producing the famous Kujawiak beer. Unfortunately, not much remains of the magnificent old breweries. However, Bydgoszcz has been proudly continuing its beer making traditions through the Regional Brewery (8 Poznańska Street), founded in 2011, whose terraces are situated in the romantic Bydgoszcz Venice. Beer lovers can select from among four types of local beer, including Pils Wenecki, Koźlak Bydgoski, Kasztelan z Bydgoszczy, and Pszeniczne Młyńskie. Koźlak is a unique, strong and dark beer of Bavarian type (Bock), made seasonally, in winter. 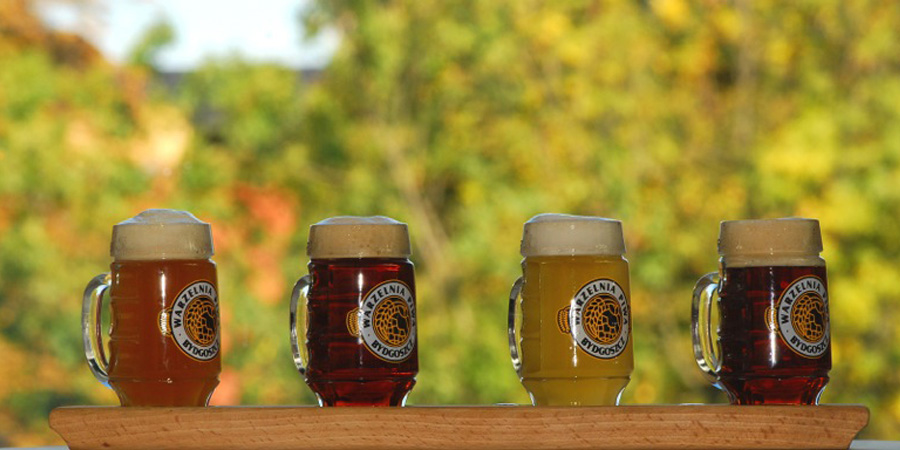 Did you know that...
Poland is the biggest producer of goose meat in Europe, but only 10% of this meat is consumed domestically. The remaining part goes primarily to our neighbour from the west. Kołuda Goose is the only native variety of this poultry, bred not far from Bydgoszcz, in Kołuda Wielka.

Legend has it that this drink, brewed by monks, was supposed to brighten the long and ascetic period of Lent. On the other hand, the name of Kasztelan z Bydgoszczy is related to the first written record about the city. Kastelanus de Budegac, if we can trust the records, was the founder of the city on the River Brda. While in brewery, we also recommend asking about the dark honey ale, which is the specialty of the restaurant. All of the mentioned varieties of beer are not always available, since they are brewed in only two vats. When drinking a beer, we can enjoy the beautiful view of the entire Mill Island or tour the inside of the establishment. For beer connoisseurs, it can be a fascinating journey through time. The Hop Room features a permanent exhibition dedicated to the history of Bydgoszcz brewing and souvenirs related to beer, presenting also a sizeable collection of labels. The Bydgoszcz Venice has links not only to beer making, but also the production of alcoholic beverages. In 1827-1945, in the area of 2-4 Czartoryskiego Street, was C.A. Franke’s distillery, which delivered to the residents of Bydgoszcz and the region the famous chocolate liqueurs and Advocaat (daily production of the company amounted to 10,000 litres of pure spirit). Warm water generated during the rectification process was used in the bath owned by the company. The best known liqueur production plant in Bydgoszcz was the company of Leistikow, father of the outstanding painter and graphic artist Walter Leistikow, co-founder of “Berlin Art Nouveau”. Carl Leistikow’s pharmacy, situated at the corner of Gdańska and Śniadeckich Streets, sold “Kuyavian infusion for vodka used for the stomach”. Warzelnia

Did you know that...

Legend has it that in the 1970s, a prankster working in the Kujawiak Brewery, during renovation of installations, connected a beer pipe directly to the water pipeline. Residents of local streets had beer coming out of their taps for half a day. Instead of calling emergency, they filled all available dishes with beer.