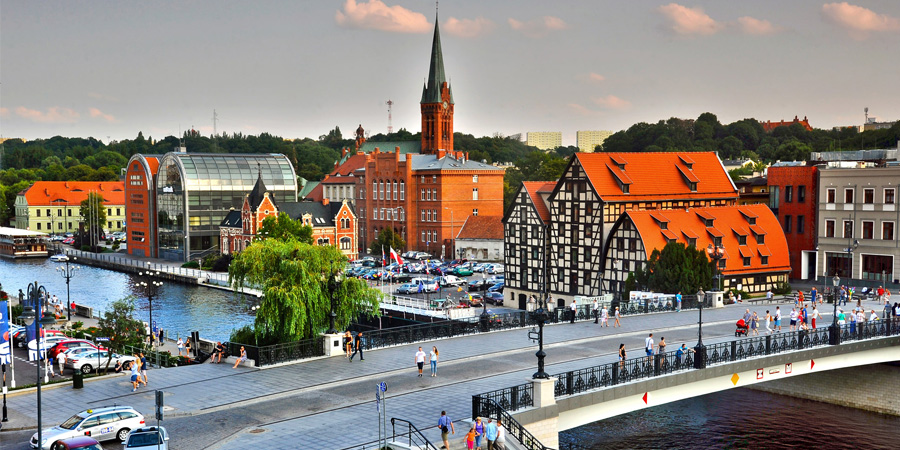 Bydgoszcz -  the capital of the kujawsko-pomorskie voivodeship, a city with three state universities and sixteen other universities and colleges. Since the time the city was granted municipal rights by king Casmir the Great in 1346, it has grown to the rank of a dynamically developing economic centre. The city is home to many international concerns that deal with the electrotechnical industry, telecommunications and banking, including Nokia, Tyco Electronics, Atos Origin and JP Morgan Chase.

Due to the fact that an airport with a modern passenger terminal is located just 3.5 km from the city centre, Bydgoszcz has excellent connections with other parts of Poland and Europe. Additionally, the city is a junction of railway, water and road routes. Owing to its picturesque location on the Brda River and the historic Bydgoszcz Canal, as well as the Vistula, the city has earned the name of the biggest Polish centre of inland navigation! It is through here that the water route E-70 from Berlin to Kaliningrad runs.

It is also worth knowing that the Old Market Square is crossed by the 18 meridian East. However, the place that actually contains a display of this geographical curiosity is Mill Island. A number of museums, the proximity of the Opera and the numerous festivals and concerts that take place in the amphitheatre make this place the cultural centre of the city.

Bydgoszcz is also called the capital of Polish athletics and rowing. Audiences from all over the world come here to admire basketball and volleyball players as well as speedway riders. The IAAF Junior Championships, IAAF World Cross Country Championships , the Great Rowing Regatta for the Brda Cup, Poland’s Speedway Grand Prix, the CEV Orlen European Championships, EuroBasket – these are just some of  a whole selection of sport events that are organized in the city on the Brda River.

The colours and symbols of Bydgoszcz

The colours of Bydgoszcz are, from the top: white, red and blue, which form equal, horizontal stripes in a rectangle with walls ratio 8:5. The city's crest occupies the flag's central place.

In the past, only settlements with civic rights bestowed by the king had the right to their own crest. The history of the city's present symbol dates back to the year 1346. The first descriptions of the crest of Bydgoszcz refer however to the image placed in a seal on one of Cistercian documents from the year 1362. Based on the descriptions of the oldest crest of Bydgoszcz preserved up to this day, one can assume that it did not differ significantly from the present image of the city's symbol.

In the collections of the Leon Wyczółkowski District Museum in Bydgoszcz, one can find a municipal seal from ca. the 16th century, which belongs to the oldest historical items of this type in Poland! It depicts a crenellated city wall, a half-opened gate, and three keeps.

The contemporary image of the crest of Bydgoszcz is recorded in the City's Statute: "In a white field there is a red crenellated city wall, with a gate and three keeps, with the central one being higher and bigger. In each keep, one can see an arched window, whereas keep roofs are blue with golden balls. On the ball of the middle keep, there is a golden wind direction indicator turned to the right side. A gate with a lifted golden portcullis is seen in the wall. The right gate wing is open, and the gate opening is silver. The gate wings are blue and ferrules are golden."

The bugle-call of Bydgoszcz based on the motif of the Kashubian cheer was composed in 1946 by an eminent musicologist and composer - professor Konrad Pałubicki (1910-1992). It was selected through a competition organised on the 600th anniversary of the bestowal of civic rights on Bydgoszcz. It was played by a trumpeter four times a day, at 9.00 a.m., noon, 3.00 p.m. and 6.00 p.m. The last musician playing the bugle-call from the tower of the Church of the Assumption was Henryk Drążek. Since 1993, the bugle-call has been played from a digital carrier and resounds from the tower three times a day, at noon, 3.00 p.m. and 6.00 p.m.