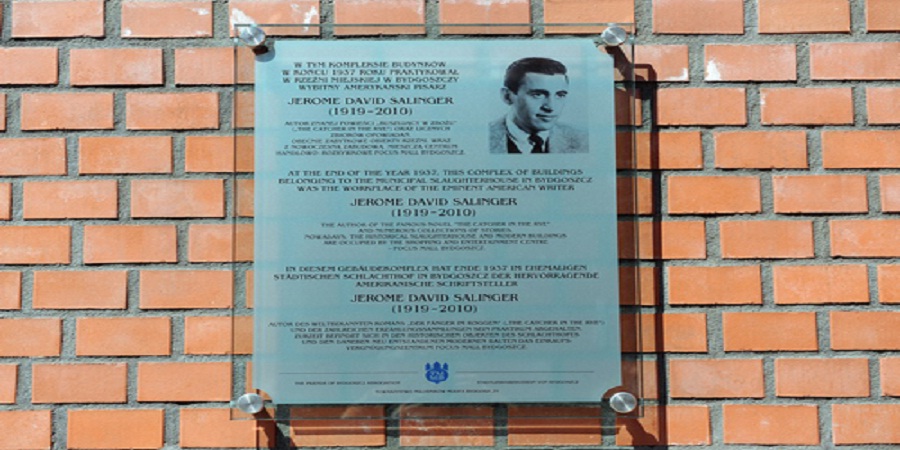 J.D. Salinger is an American author, best-known for his work, The Catcher in the Rye, published in 1951. However, long before he wrote the book that made him famous, he was just an ordinary student enjoying college and family life.

He was enrolled in New York University in the autumn of 1936 in pursuit of a bachelor of arts degree. However, after his second semester, he realized that he was not going to pass and he dropped out of college. Since Salinger, had no prospects for his future,  his father, Solomon, suggested to him that he should travel throughout Europe under the pretense to improve his French and German. The reality was that Solomon planned for Salinger to travel to Poland and Austria in hopes of sparking in him an interest in the import business. Salinger spent 10 months in Austria, but where he really learned the basics of the import business was in Bydgoszcz , Poland. Bydgoszcz is a north-central city in Poland and it was here that Salinger worked at a slaughterhouse. The slaughterhouse no longer exists, and in its place stands the present-day mall Focus. A plaque, which was paid for by the owner of Focus, resembling J.D. Salinger is located on the side of the redbrick shopping center.

Sol had arranged a job for Salinger in a business that belonged to Oskar Robinson, known as Poland’s Bacon King. However, the plan was suddenly disrupted when Robinson abruptly died of a heart attack in a Vienna casino. Nevertheless,  he continued to Poland, specifically to Bydgoszcz, where he stayed in a guest apartment of Robinson’s meatpacking factory. It was here that Salinger experienced what it meant to work at a meat import business. He had to get up before dawn and deal with peasants in the city slaughterhouse. Most of the co-workers, whom Salinger met while at the slaughterhouse, would not survive the next few years. Most importantly, it was here that Salinger would butcher pigs destined for the American market as “canned picnic hams”. He was not very fond of this job, especially since he was accompanied by the head “slaughter master,” who enjoyed the psychological torture of his animals, firing a handgun into the overhead light bulbs and at the birds that happened to be in his path. It was here in Poland that Salinger discovered that he was not suited for his father’s choice of career. Although, Salinger despised his father’s attempts to fix his son’s future, Salinger did admit that he valued this experience towards his profession of being a writer of fiction. His experiences both positive and negative, including his stay and work in Bydgoszcz, Poland had a profound effect on him and his work.