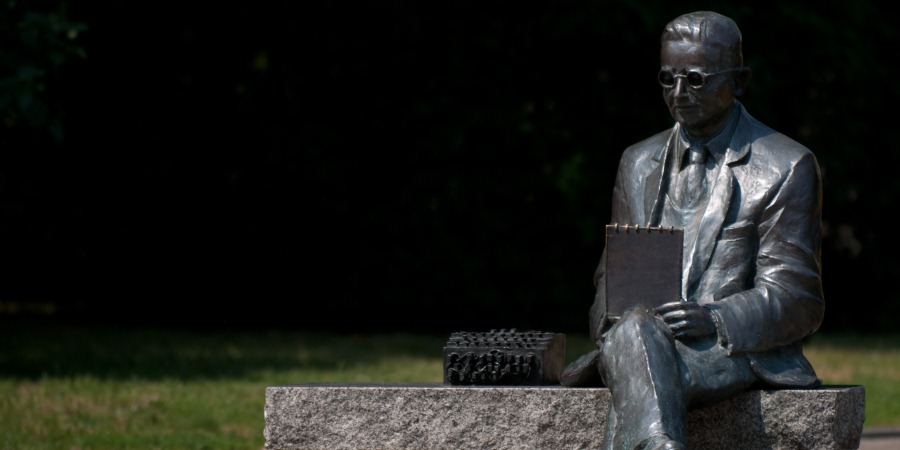 The Patron of Bydgoszcz in the year 2015 was Marian Rejewski as 2015 marked the 110th anniversary of this outstanding mathematician and cryptographer, who entered this world 16 August 1905 in Bydgoszcz – he lived with his parents at 6 Wilenskiej Street, where today there hangs a memorial plaque.

The persona of Rejewski is commemorated also by a plaque that hangs on the wall of the Wojsk Lądowych Museum, and in the 100th anniversary of his birthday at the intersection of the Gdańskiej i Śniadeckich Streets a sculpture was unveiled representing the cryptographer sitting on a bench. Rejewski is the Patron of the Pedagogicznej Biblioteki Wojewódzkiej (Pedagogical Provincial Library), streets (connecting the streets Fordońska with Akademicką) and the auditorium of the Mathematics Department at the University of Kazimierza Wielkiego (University of Casimir the Great).

Marian Rejewski – breaking with Henry Zygalski and George Różycki – the code of Enigma, German enciphering machines, contributed to the quick ending of World War II. He is one of the greatest citizens of our city.

In the year 2002 – posthumously – the Bydgoszcz citizen was decorated with an important Polish Order. In 2012, he received the Knowlton Award, a special honor from the Military Intelligence Association, and in 2014 with “Milestone” – the highest laurel of international professional associations “The Institute of Electrical and Electronics Engineers from the seat in the United States.
Marian Rejewski died on 13 February 1980 in Warsaw. His remains rest at the Military Cemetery at Powązki.