Granaries on the Brda

The Bydgoszcz granaries on the Brda River are the symbol of the city. They have always been a natural city logo. Why so much sympathy, respect and pride for, you might say, mere granaries - buildings far more modest than extravagant mansions, stylish churches or imposing monuments?

The location of Bydgoszcz is not accidental. 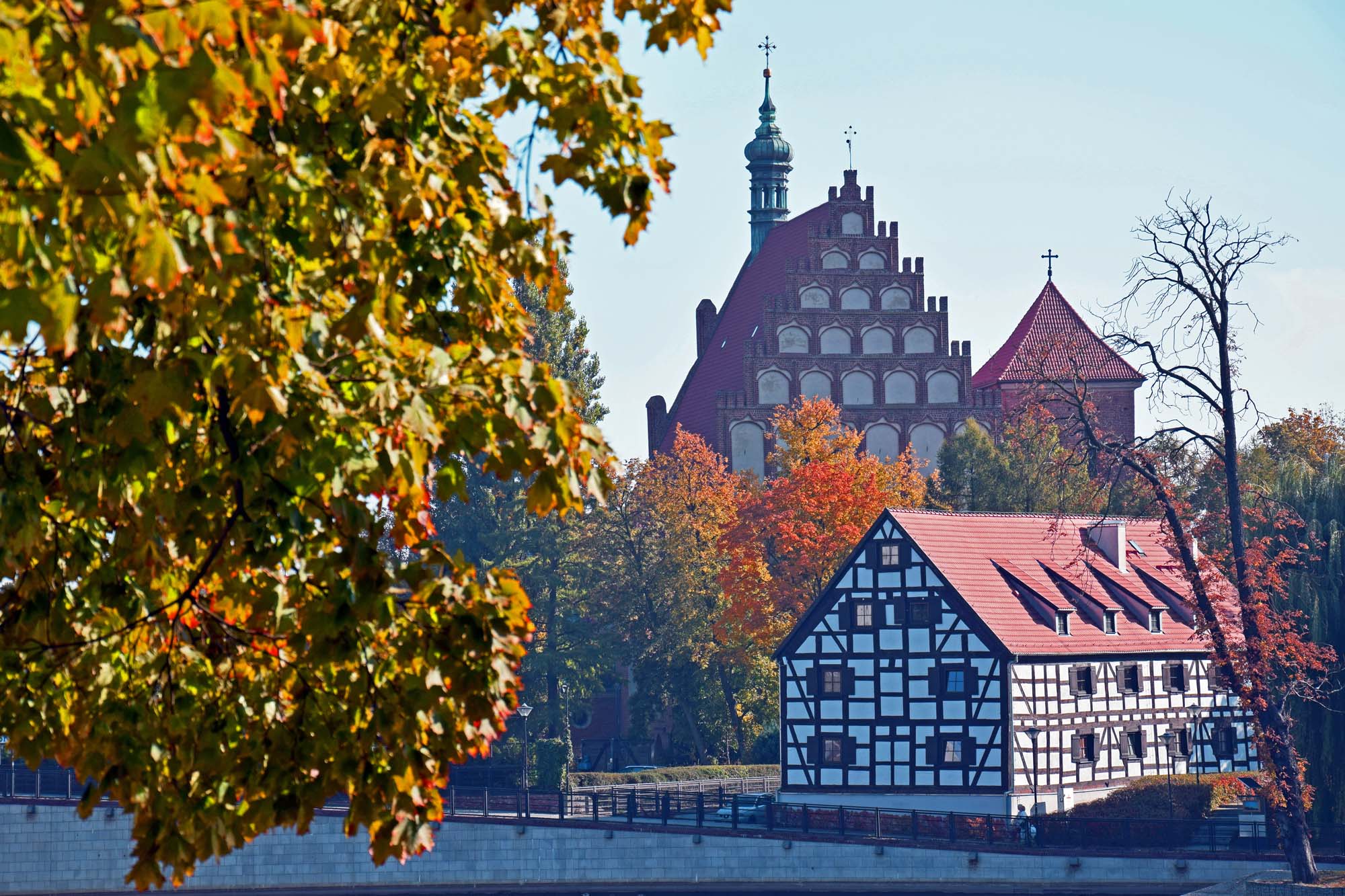 e, the terrestrial trade routes from Wielkopolska to Pomerania and from Krajna to Mazovia double-crossed paths, and it is also on the most important Polish trade route which was the Vistula River. In the vicinity of Bydgoszcz the Vistula, a true water artery, naturally connects with another waterway - the Brda River, and since the eighteenth century it has also been linked by the Noteć-Bydgoszcz Canal to the Oder and Western Europe. In the fifteenth and sixteenth century Bydgoszcz developed incredibly rapidly. The driving force behind this was obviously its flourishing trade. The main trade was mostly grain harvested in Kujawy, Krajna, Wielkopolska and Pałuki, but also other agricultural produce and craft products: pots, beer, wine, wood, tar, honey, salt, sugar, exotic spices, etc.

As a St. Bernard monk wrote in 1604: "Thanks to this charitable river, the town has achieved so much splendor and wealth that nobility from other places, seeing that their property is melting away, come to Bydgoszcz to cover their losses by buying grain and sending it to Gdansk. Citizens who give their daughters in marriage, offer a respectable dowry". And this is the reason why Bydgoszcz excels over all the cities in the Polish Kingdom. The city quickly exceeded the designated area within ​​its city walls. Economic prosperity acted as a magnet and attracted the development of settlements in the city. And what do you think, how did Bydgoszcz develop spatially from the fifteenth to the nineteenth century? Concentrically around the Old Market Square and the Town Hall? Not at all. Just look at the historical and contemporary maps. Bydgoszcz developed along the Brda River - west along the Bydgoszcz Canal and east towards the Vistula.

The current center of Bydgoszcz, from the former castle in the east, to Mill Island in the west, used to be one big docking port. 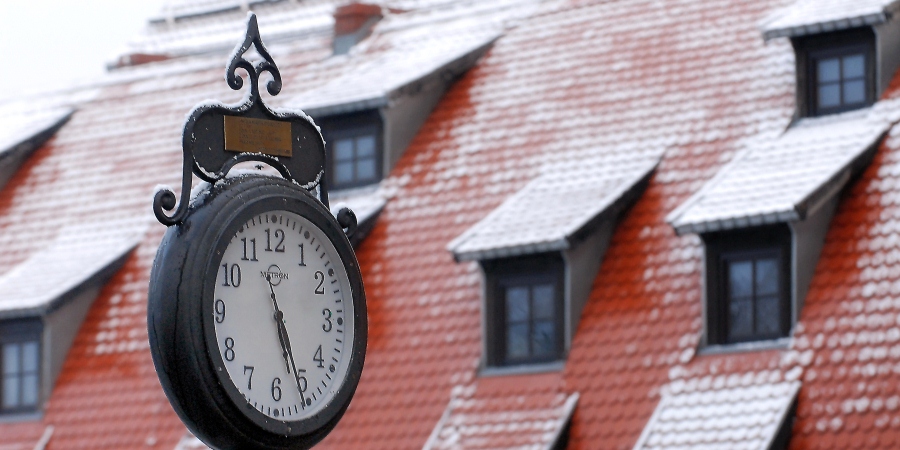 On both sides of the Brda there were granaries, warehouses, marinas and repair shipyards. On the river banks there were also Carmelite and St. Bernardine monasteries and Clarist convents, but mostly granaries. The Brda was of utmost importance for the city. The seventeenth century town mayor Wojciech Łochowski wrote proudly in his Chronicle:

"Bydgoszcz is famous for its harbor. On both sides of the river there are magnificent buildings, worth seeing, built exclusively for the storage of large quantities of grain arriving from Wielkopolska, all over Pałuki, Krajna and Kashubian regions. It is difficult to find another city in the Polish Kingdom where every year such large quantities of grain are collected and exported to Gdansk. Returning to Bydgoszcz from Gdansk, up the river, there's herring, sea salt, oranges, wines from France, the Rhine, the Canaries, Crete, and Malvasia".

During the Polish partition, the importance of water trade did not diminish. On the contrary, between 1772-1800, the Bydgoszcz Canal to the Noteć and the Oder experienced a boom, the former Mint Island was converted into Mill Island, on which an entire complex of mills and granaries, among others, was built. This provided the food supply of the Prussian army. It was also around that time, that the huge Royal Granaries were erected just next to Mill Island and the city, in the bend of the Brda. They were destroyed during the Second World War and replaced by the modern New Opera House.

Waterway transport flourished until the second half of the nineteenth century, when it began to be gradually replaced by railway. 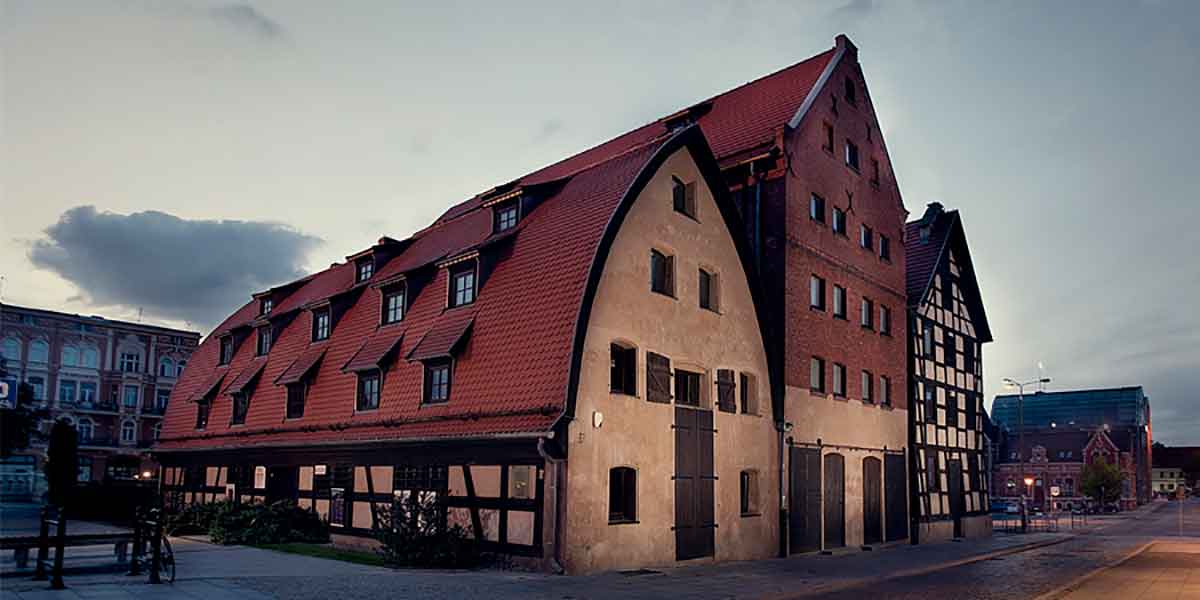 To this day, a few historical granaries have been preserved in Bydgoszcz, of which only four date from earlier than the nineteenth century. All of them are on the banks of the river, in the city center, all half-timbered and all currently functioning as museums. The three granaries at 9 – 11 Grodzka Street, (which are also the modern logo of Bydgoszcz) were built in the years 1793-1800, by the merchant Samuel Gotlieb Engelmann. The original complex in Grodzka St. consisted of five granaries in a row. In 1960, two of them were destroyed completely (13 and 15). However, they were so firmly inscribed in the urban tradition, that many Bydgoszcz voices spoke up for their reconstruction. The preserved granaries were turned into museum exhibitions in 1962 and a major overhaul and modernization of the interior was completed in 2006.

A particularly favorite spot of Bydgoszcz citizens is the characteristic granary next to Mostowa Street, sometimes called "Dutch" because of its gabled roof style. In front of the granary there's a small amphitheater, and a medieval bronze model of Bydgoszcz. The oldest Bydgoszcz granary is called the White Granary on Mill Island. It was built in the fourth quarter of the eighteenth century, just next to the already defunct Warehouse Bridge. The bridge has been replaced by a modern pedestrian footbridge connecting Mill Island with Opera Nova. In 1975, among other facilities on the island, the White Granary was given museum status.

There are other granaries on Mill Island dating from the nineteenth century.

A flour granary was built around 1851 on the Brda Młynówka, which is now the stylish restaurant "Młyńska Tavern." The so-called Rother Mills and the granaries next to the beautiful modern marina in the northern part of Mill Island are under renovation . On the other bank of the Brda, in the old barns, there is now another stylish restaurant: "Stary Port" (13 Stary Port Street) and a popular youth club called "Awangarda" with a very interesting interior (21 Stary Port Street). The old and the new Bydgoszcz are symbolically connected by the suspended contemporary sculpture "Crossing the River" by Jerzy Kędziora, unveiled at midnight on 1 May 2004, for the occasion of Poland joining the European Union. In the same place you can find the modern building on BRE Bank, a kind of modern granary on the banks of the Brda (an award-winning project in a national architectural competition). The bold, modern building is loyal to the architectural climate of the former center of Bydgoszcz. Symbolically speaking, the granaries have always contributed to (and hopefully will continue to) the financial well-being of Bydgoszcz its citizens.