We start our time travel. We will visit the ethnographic region of Pałuki. Its name originates from the bowlike hilly landscape, abounding in lakes and wetland meadows, that is steeped in ancient history and veiled in legends. 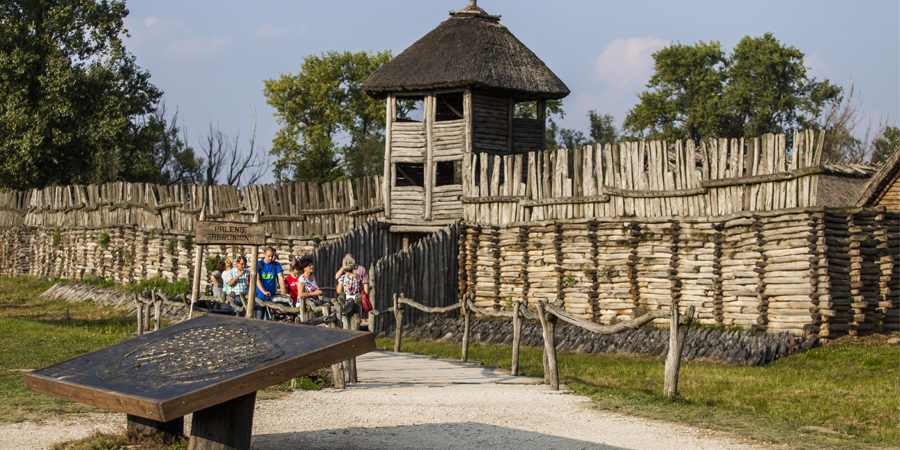 Our route leads via the gmina (local authority area) of Białe Błota. Its area is criss-crossed by the River Noteć, the Upper Noteć Canal and the Bydgoszcz Canal. A part of Białe Błota is located at the edge of the Bydgoszcz Forest, thanks to which close to the city one can relax while discovering the secrets of the forest. A 5-km-long picturesque didactic path leads us deep into the forest. Near Szubin it is useful to know that the Żędowskie Lakes Protected Landscape Area has been established here. In this vicinity, we can see splendid manors and stately homes, as well as wartime bunkers. Szubin town was the location of the Oflag’64 prison camp during the second world war.

You may also like -->> Road trip Lower Vistula Valley 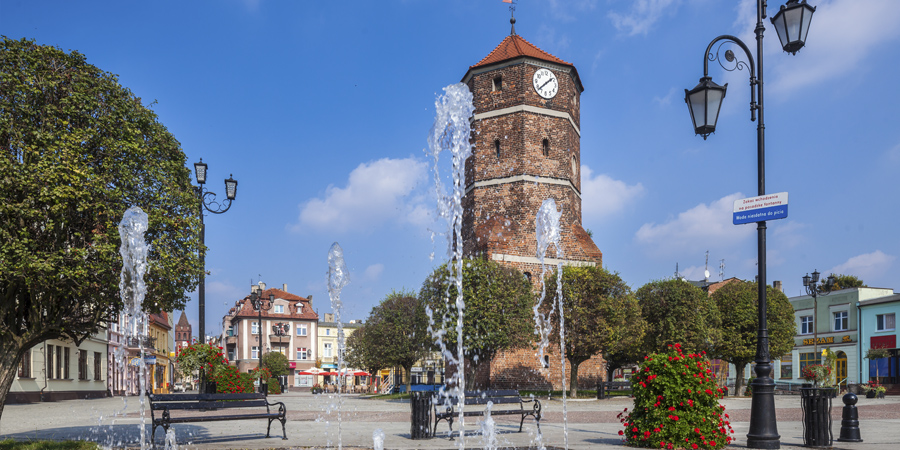 Żnin will welcome us with its cosy Market Square and small-town atmosphere. According to the Bull of Gniezno, Żnin was already belonging to the Church in the first half of the 12th century. The lofty town hall tower from the 15th century recalls the town’s rich history. Our imagination is stimulated by the recreated interiors of the municipal treasury, the arsenal and the hall where town councillors used to hold debates. In the days of archbishop Jakub Świnka the town obtained the right to use its own coins. The Amber Trail used to run through Żnin and this had an influence on the town’s development. In the Market Square, at the Municipal Office – currently the Museum of Pałuki Land, we can familiarise ourselves with the life of the residents of neighbouring villages at the turn of the 20th century. The museum displays items of everyday use and Pałuki folk costumes. A separate exhibition shows the printing and publishing traditions of Żnin, from where the Polish colour press originate. The basements of the Municipal Office are occupied by the Museum of Motorboat Sports. This is to commemorate the successes of the competitors who participated in international motorboat competitions that were held in Żnin for over 30 years. There are trophies, photographs, old posters, and a collection of engines. Żnin is the initial station of the Żnin Poviat Railway, which takes tourists to Wenecja, Biskupin and Gąsawa. 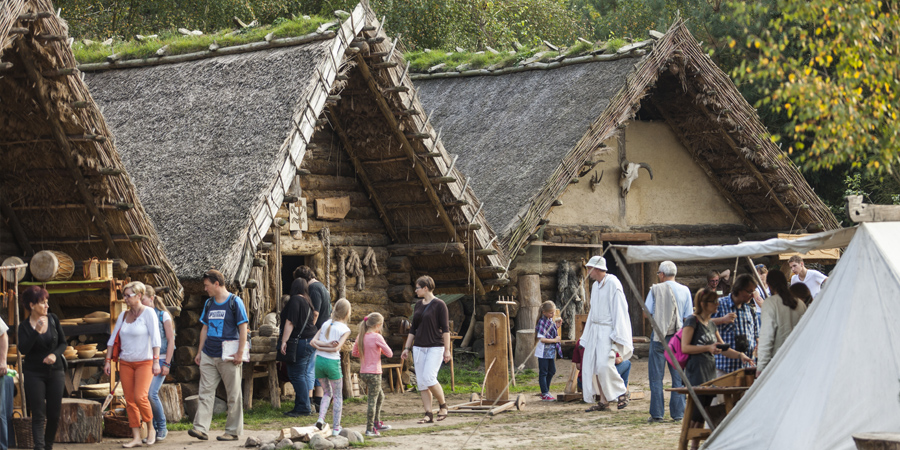 Biskupin attracts Polish and foreign tourists. Owing to archaeological discoveries before World War Two, Biskupin was hailed as the “Polish Pompeii”. Settlements of the first farmers dating back 6000 years, and a settlement from the Lusatian culture period dating back 2700 years have been reconstructed here.
Thanks to these reconstructions we can see wooden huts where farmers of old are sitting by a fireplace, and a medieval village where we can get to know forgotten artisanry that goes back in time to the days of the first Piasts. During the September Archaeological Festival, the entire settlement comes to life with re-enactments of its original residents, who are joined by representatives recreating different ancient cultures.

Gąsawa boasts a historical larch church dating from around 1625. Everyone who enters this little wooden church is impressed with a group of murals that were uncovered when plaster was stripped from the walls and ceiling. Considering the effect they create, they are called tapestries or arrases. The murals, which occupy 700 square metres in this modest space, make an impression and not only on art connoisseurs, who recognised them as a unique European artwork and a gem of sacred art. 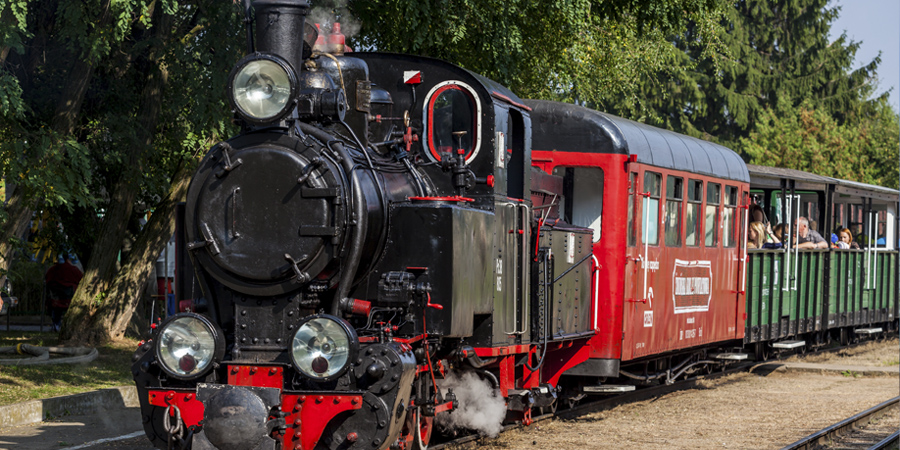 Wenecja has two interesting tales for visitors. We can learn about the first one in the Narrow Gauge Railway Museum. It is a place in which sentiment mixes with the feeling of sorrow of those who miss the narrow gauge railways that are now disappearing from our lives. Although, thanks to their dimensions they look like vehicles from a fairy tale, we will find out that they worked very hard, transporting various goods and served as an invaluable means of transport, particularly for the residents of villages and small towns. There are 17 locomotives, 4 diesel draisines, freight and passenger railcars, and a railway mail car. We will learn about the jobs performed by an engine driver and his assistant. In proximity to the open-air railway museum, there are the ruins of the castle of “Wenecja Devil” - Mikołaj Nałęcz. The stronghold was built most likely in the late 14th century on an island surrounded by bogs. Although in this location with huge stone and brick ruins it would be nice to listen to a story straight from the fiery pits of hell, we will find out instead that the devil is not so black as he is painted, and we will even find the site that was previously occupied by the castle chapel. 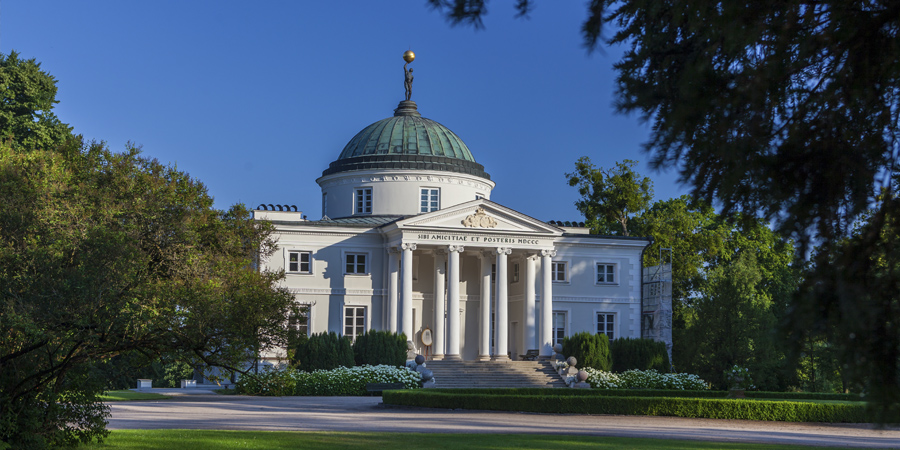 We recommend returning to Bydgoszcz via Lubostroń, which features a charming classicist palace erected by count Fryderyk Skórzewski in 1795-1800 on land inherited by his mother, Marianna Skórzewska. In this “sercu lube ustronie” (in Polish, a retreat close to one’s heart), a count educated by the Piarists created a place used for patriotic meetings, concerts and performances. This attitude of the historic owners can be confirmed by the impressive sculptures and frescoes on the walls inside the palace. The building, modelled on the Renaissance Villa la Rotonda in Vicenza, Italy, is crowned with a statue depicting Atlas holding the terrestrial globe. In addition, the residence consists of an annexe, stables and a coach house. The buildings are surrounded by the abundance of greenery of an English landscape park, occupying 40 hectares. These days, we invite you to Lubostroń in particular to one of the events organized here, including the festival “Music in the Light of the Moon” and the “Horse Drawn Vehicles Competition”, for which the former estate of the Skórzewski family offers a perfect setting.

Łabiszyn situated en route is a quiet little town on the River Noteć. Its residents foster the spirit of the history of war. Since 2011 they have been organizing “Łabiszyn Meetings with History”, an event that literally changes the image of the town. It features a true warlike atmosphere with re-enactments of battles and scenes played by local residents and re-enactors both from Poland and abroad. Every year there is a focus on different facts. In order to explore the scope of this event, you have to learn about Łabiszyn on a weekday and rediscover this place during its “Meetings with History”.

Filled with memories, we return to Bydgoszcz. It’s time for a well-deserved rest and a moment of reflection on the deep-rooted history that dates back to ancient times, and to the planning of new trips. There are still some attractions that are worth a visit … One of them is Barcin, with the Mountain of St Adalbert, which according to legend is a place where he decided to stop for a break during his journey from Prussia to Warmia. God-fearing people determined that the bishop had marked this place, since horses carrying his dead body stopped here on the trip back and did not want to go further. A mound was built in order to commemorate this event. The architectural layout of the old town of Barcin is under the protection of a conservator-restorer and it has a manor in Dąbrowiecka Street, a dairy and a mill. In the vicinity of Barcin , in Złotowo, a megalithic tomb from the period of the Globular Amphora culture from the New Stone Age, about 4 thousand years ago, was discovered. In the nearby village of Piechcin, there is one of only a few flooded quarries used as dive sites in the country. At the bottom of this limestone quarry one can find machinery, vehicles and a yacht. It is a real paradise for those who search for underwater thrills. In Pakość we can visit one of the oldest Polish Calvaries. The Site of the Arrest and the Stations of the Cross were outlined in 1628. “The Kuyavian Jerusalem” consists of 24 chapels of the Passion and two churches. The spa town of Inowrocław, the “town built on salt”, is located only 15 km away.