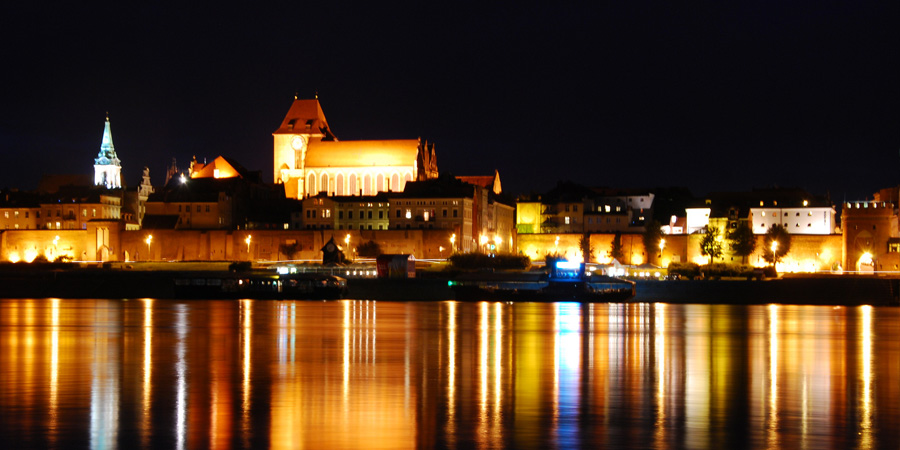 Toruń is a city with a population of 200,000, situated on the River Vistula. The border of the two historical regions of Poland – Pomerania and Kuyavia – runs through the city.
Toruń was founded by the Teutonic Knights in 1233.

Access to the Vistula contributed to the development of a prospering river port in the city. Thanks to extensive trade relations, the city grew at a fast pace. In the 19th century, thanks to its strategic location, the city was surrounded by a ring of Prussian fortifications. A dozen or so large forts have remained to this day; one of them is open to the public (86 Chrobrego Street).

In 1997, the Toruń Old Town was designated as a UNESCO World Heritage Site. Some of the factors that contributed to this designation include the medieval urban layout of the Old Town that has remained unchanged for centuries and a host of historic sites. The Toruń Old Town is a gem of gothic architecture. Some of the most impressive landmarks include the Cathedral of St Johns (which features the baptismal font in which Nicolaus Copernicus was christened), the Church of the Blessed Virgin Mary, and the Church of St James, regarded as the most beautiful in Toruń. One of the most prominent historic buildings is the gothic Town Hall. The city gates and fortified walls, dating back several hundred years, are also examples of gothic architecture. The distinct Leaning Tower has become one of the symbols of the city.

Toruń is also the hometown of the great astronomer Nicolaus Copernicus. In order to find out more about his life, we recommend a visit to his family house, featuring an exhibition dedicated to his life and achievements (15/17 Kopernika Street). A monument commemorating the astronomer is seen in the Old Town’s Market Square.
Another symbol of the city is Toruń gingerbread, baked for centuries according to the traditional recipe. We invite you to visit the local museum, which shows the secrets of gingerbread making and allows visitors to bake their own gingerbread (Live Gingerbread Museum, 9 Rabiańska Street).
The deep-rooted history of the city is reflected in valuable collections of the local museums. The Town Hall displays examples of gothic art and products made by early craftsmen. Small galleries in the Old Town offer unique souvenirs.

Today’s Toruń is a venue of innumerable events, concerts and exhibitions. It hosts international music, theatre and film festivals. It is also a major college town. Young students full of energy create the unique atmosphere of the city. A plethora of restaurants and cafes, varied accommodation and numerous attractions make Toruń a must-see tourist stop.