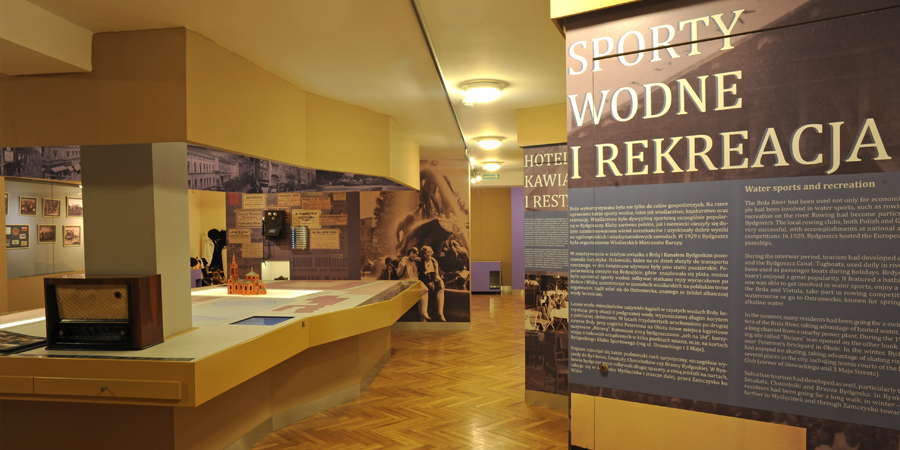 The purpose of the exhibition "From Old Market Square to Wolności Square. Walking the streets of interwar Bydgoszcz" is an interactive presentation of the interwar , multicultural city of Bydgoszcz and its historical origins. The displayed topics refer to the cultural heritage, economy, as well as the complexity and diversity of processes and phenomena, which supported development of the city on Brda River along with dynasmics of change taking place in it. The city has been presented as a spatial and social organism, functioning in a concrete time period.

Selection of the twenty-year interwar period as a time consoliding all themes of the exhibition in not accidental, sine the return of Bydgoszcz in January 1920, after almost one hundred fifty years of Prussian annexation to the reborn Poland was a real breakthrough, opennig the history of the city to a new stage of intriguing social, cultural and economic changes.

The exhibition narrative concentrates on a walk in the downtown area – from the Old Market Square, through Mostowa Street, the Teatralny Square, Gdańska Street, all the way to the Wolności Square. This travel in time leads us from the newly founded city to a modern center, with an important status in the borderland of Pomerania, Wielkopolska and Kuyavia. Thanks to this approach to the topic, it is possible to layer cultural elements from various periods in the history of the city. In addition, the exhibition serves as a guide to Bydgoszcz, featuring the most important symbols of the city, landmarks of urban architecture, interesting sites, as well as people and their daily life, and memorabilia left by them. In addition, Jerzy Sulima-Kamiński, who wrote the book Most Królowej Jadwigi (Queen Hedwig Bridge) serves as an interpreter of the realities of the interwar world. The quoted fragments of his novel lead the spectator through consecutive sites of the title walk. The goal of the exhibition is supposed to encourage to confrontation between the knowledge acquired at the exhibition and the reality, tours of the city and individual discovering of its hidden meanings.

The exhibition was divided thematically into two large parts corresponding with the layout of the walls. The first one, which occupies a historical interior (wooden ceiling), introduces the topics of the exhibition to the spectator and provides detailed information on the history of Bydgoszcz, structure of the municipal authority, trade and crafts, the denominational melting pot, and landmarks of the city.

The second, proper part of the exhibition, in a neutrally shaped room, shows exhibits related to functioning of the interwar city, dynamics of its development and life of the Bydgoszcz residents. The focal point of this part of the exhibition is two tables, combining the features of a mockup, multimedia directory and the exhibitor of iconographic material. They promote the idea of the title walking the streets of the city, depicting the urban situation of the described area. They introduce a legible division of the area, as regards materials and topography. The first one, showcasing the area of the Old Market Square, Mostowa Street and the Teatralny Square, describes topics that are related to this part of the city. It indicates the significance of the Old Market Square as an administrative-commercial center of the city and highlights the role of the Brda River in trade and water transport as well as water sports and the wide range of recreational activities. On the other hand, the Teatralny Square, which is a public transport junction, serves also as a site tied to the Bydgoszcz culture. The second table focuses the spectator’s attention on buildings of Gdańska Street and the Wolności Square. The solution of this type facilitates presentation of information related to trade and services, entertainment (hotels, cafes, and restaurants) and celebrations of important events, integrated with the main thoroughfare of the city. Slightly further, there are exhibits related to the extensive topic of economy, including industry and investments in the city. In addition to the mentioned topics, there are exhibits presenting the daily life of residents of the interwar Bydgoszcz (Poles and ethnic minorities). A strong aspect of this part of the exhibition is the Polish-German relations, thanks to documentation related to the history of the Bismarck’s Tower. The last stage of the walk is dedicated to the Bydgoszcz Museum, an institution which origins date back to the interwar period. From today’s perspective, the end of the visit to the exhibition in this place should confirm the thesis that one learns about the history of the city in the museum.

The exhibits, which include material culture objects, iconographic and cartographic sources, documents, posters and advertisements, are placed in display cases, most frequently mounted sideways. The exhibition narrative is additionally enriched by the retrospective “memory windows” – multimedia, which task is to expand the information presented at this exhibition, in historical, spatial and topographic aspects.

A separate fragment of the exhibition is a special education space, prepared to the youngest visitors. It is a place, in which children through games and plays can check and practically apply the knowledge acquired while visiting the exhibition.