Mill Island - the spatial heart of Bydgoszcz. A green enclave in the heart of a vibrant city, home to 360,000 inhabitants. The island has not yet been seized by our greedy modern civilization. How surprising! A park and alleys flanked by old trees: chestnuts and lindens. Vast lawns, alleys with benches and the sound of water falling rapidly through the weir.

Mill island - in the heart of the city 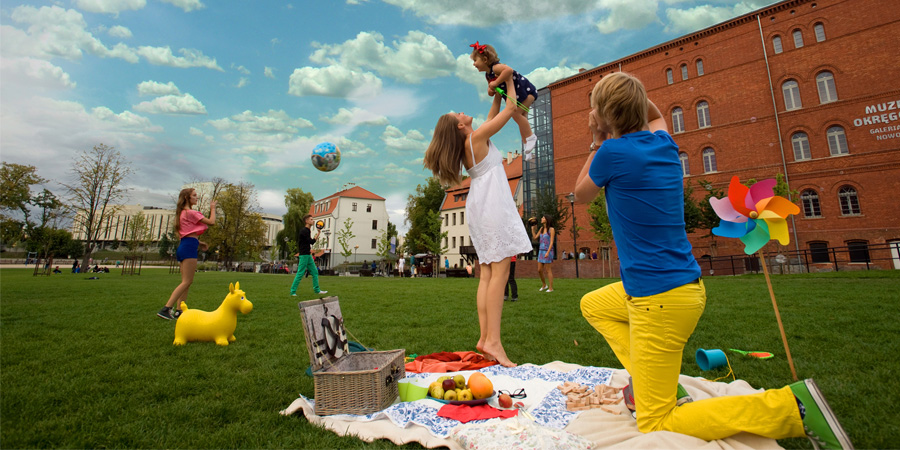 Water all around. From the old town flows the fast, restless Brda-Młynówka, following the wall of Bydgoszcz Venice – named so because of its countless picturesque blocks of old houses, outbuildings and annexes. On the other side the mighty main canal of the Upper Brda, the outlines of the dignified Fara Cathedral and the New Opera House. Behind the cathedral there’s the Old Town– the main square in the city. Between the two rivers, a long embankment with dense rows of old trees connecting Mill Island with the modern world through the Solidarity Bridge on Foch Street.
Among the green areas of Mill Island, there are also houses. Scattered chaotically, almost all of them are old places of interest. They contribute to the specific character and mood of the island: old mills, grain warehouses, granaries, storehouses, all creating an amazing, historical industrial landscape. Crossing the border of Mill Island, over the bridge in Niedźwiedzia Street, from the Old Town direction, or using the embankment coming from Foch Street, is like travelling back in time...
In recent times, Mill Island has seen a revival project, a joint effort of the city and European funds, also the Norwegian Fund, making it one of the most visited attractions in the city. The contemporary revitalization project was discreetly concerned with: modernly-organized museums, gastronomy, water transport, recreational areas on the grass, a playground and also a sequence of modern footbridges connecting the island with other central parts of Bydgoszcz.

Exhibitions on the Mill Island:

-->> History and the present state of the Mill Island

-->> Bydgoszcz and its environs since the dawn of time

Mill island – the mint "on the water" 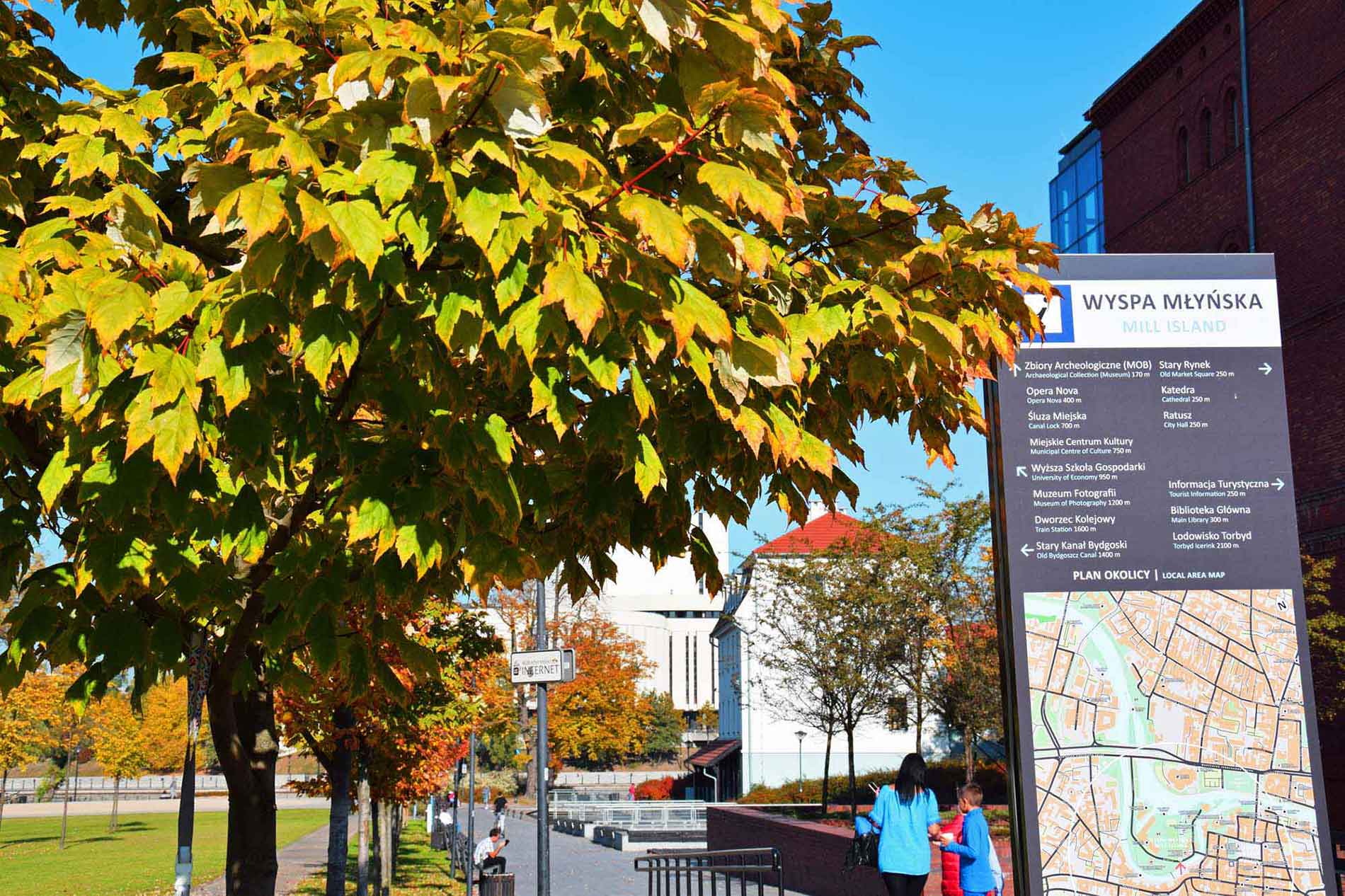 At first, before they started to make coins for the Polish king on Mill Island in Bydgoszcz, we could find here a church mill which was mentioned before 1408, a large mill from 1541, the City Bath, and also a sawmill. However, it was the king's coin mint that made Bydgoszcz a real feature on the map of the First Republic.
It was a huge factory, which occupied the entire eastern part of the island to Miedzywodzie (at that time there were no less than 3 islands, which were later merged). The Middle Ages mint consisted of several buildings of different sizes and various uses. For centuries, despite the fact that the mint almost neighbored the city, the market, and the parish church, it remained strictly isolated due to the nature of the production. Although the whole factory was located on the island, it was also surrounded by a wall, partly wooden, and a solid fence from the east and north sides.
One could enter the island through the Mint Gate, like entering a separate town (the gate was located behind the cathedral, in the area of today's so-called White Granary). Just beyond the mint gate, one could see the first important buildings of the factory complex: support and storage facilities and the forge. In the forge, also called the blacksmith, planchets (or blanks) were prepared for future coins. Damaged tools were also repaired here, nails were made and bolts were threaded. The locksmith’s flat was located in the attic, and at the entrance of the blacksmith shop there was a stone for sharpening tools and a table for threading screws. After the fall of the mint the forge was converted into the miller’s house (later called "the Old Miller's House").
A half-timbered coach house was situated in front of the forge, and on the shores of Miedzywodzie there was a stone stable. These four buildings were like the atrium of this industrial complex. The main Mint buildings could be found concentrated further south, in the area of today's Młyńska Tavern and the Red Granary Museum.

A really big factory, one of, or perhaps the largest in the sixteenth to eighteenth century Poland. At that time in Bydgoszcz there were only detached, brick or timber-framed houses, whilst in the Mint even the inferior, administration buildings were massive.
In Bydgoszcz, the Royal Mint produced a lot of different coins, from the bulk or so-called minor, casual coins, like the popular tymfs, boratyns and thalers, to coins and medals of high monetary and artistic value. 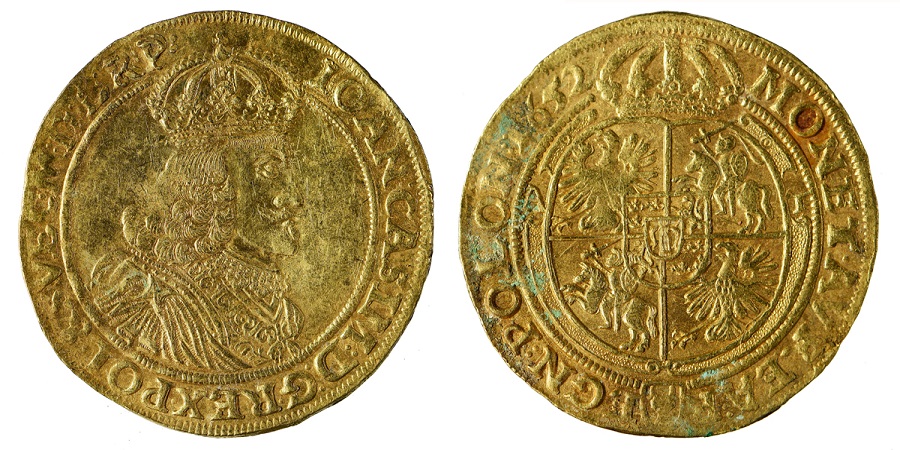 What about the scale of production at the Bydgoszcz mint? At that time it was very large. One minter processed approximately 60 kg of silver a day. There were 12 - 15 minters working at the mint, therefore 620-900 kg of silver were turned into coins each day. So what can we say about the number of coins produced, especially the low-value ones? Very hard to say. Enough said that boratyns truly flooded the Republic and its neighbors. At some point, this triggered protests by the nobility in the Sejm, which actually sought to ban the production of small coins. At a time when the Royal Treasury ran into problems, the proportion of silver in coins had to be reduced. The material value of the coins became lower than their purchasing power. This was the case with tymfs and boratyns. When the Tymf brothers, tenants of the Bydgoszcz mint, exaggerated with the amount of silver content in their coins, leading to their banishment, the following saying remained "A good joke is worth a tymf".
The mint stopped working probably around 1702, but it was only in 1765 that the Sejm Commission ordered the Treasury to draw up an inventory of the Bydgoszcz mint, and send everything of value that was left to Warsaw.
The mint stamps were sent to the capital, and the dilapidated, abandoned buildings remained in this state throughout the eighteenth and nineteenth centuries.

Mill island - the beginning of the bydgoszcz canal 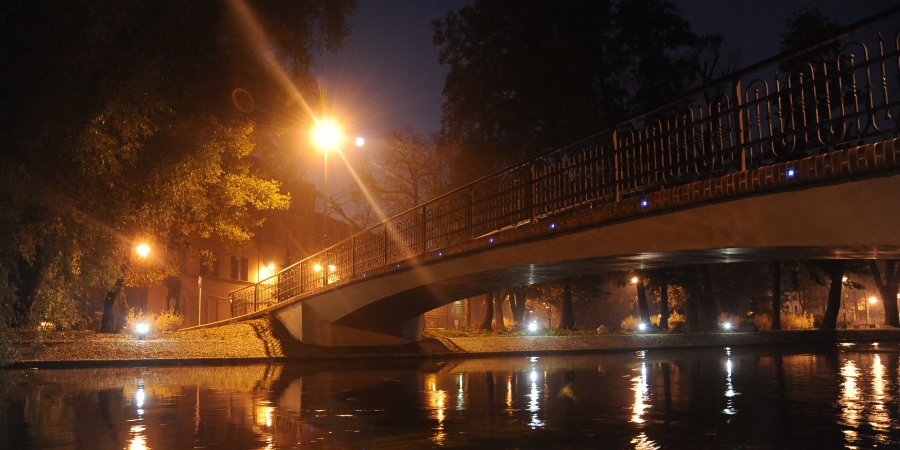 In the eighteenth century Bydgoszcz was not in the best economic condition. After bouts of epidemics and war, there followed a very serious economic decline. The city almost collapsed. Also, the old mint buildings were demolished or poorly used and fell into disrepair.
New and better times for Mill Island came as a result of an extraordinary, massive-scale European investment. Immediately after the occupation of Bydgoszcz in the Polish partition of 1772, King Frederick II of Prussia undertook the implementation of the bold projects of Polish engineers, drawn up under the last king Stanislaw August Poniatowski. They concerned the linking of the natural waterways of Eastern and Western Europe. So started the construction of the Bydgoszcz Canal. It was then that the island became home to the Royal Mills, the Prussian army food supply, while the neighboring city sluice opened the water “highway” to the west of Europe (the comparison is no exaggeration once we take into consideration its economic importance). 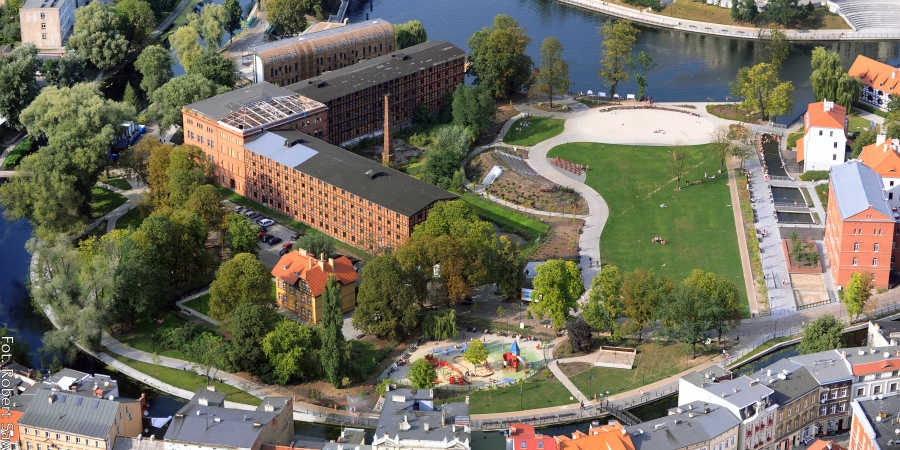 Work on the construction of the canal began in 1774, with the reconstruction of the water system around the Brda River and Mill Island. The flow of the Upper Brda could be narrowed, cut and regulated by the Municipal Sluice Gate. Further to the north, the Brda was joined with the Municipal Bydgoszcz Canal, by means of the Municipal Sluice, and flowed further west to Noteć, Oder, Berlin, Bremen, Hamburg and Amsterdam...
During the construction of the first section of the canal, an embankment leading from Mill Island to the present bridge on Foch Street was constructed. Most probably at the same time, rows of young trees were planted on the embankment, trees which today, after more than two hundred years, form an unusual green tunnel in the centre of the town. Also then, the third important entry to the island was built, as an extension of Niedźwiedzia Street, coming from the Old Town. The so-called Mill Bridge was built around 1791, with the current bridge more or less retaining its position. There was no need to isolate the island from the city any more.
In 1789, on the other side of Mill Island, the massive Royal Granaries were built. Burned down during the Red Army invasion in January 1945, they gave place to today's New Opera House .
When the Royal Granaries were built, the construction had to be carefully planned, as there were other industrial buildings and equipment on the island. For this purpose, around 1789, the Warehouse Bridge was built, which was recently rebuilt as a modern pedestrian footbridge linking the Old Town with the New Opera House. It was also then that the road to the Warehouse Bridge was built, a paved section of which survived to this day, next to the so-called White Granary (built in 1789).
The construction of the Bydgoszcz Canal and the Handling and Wood Ports, along with the Royal Mills complex in the late eighteenth century, were investments at an unprecedented scale at the time. Bydgoszcz was starting to become a modern industrial and commercial city.