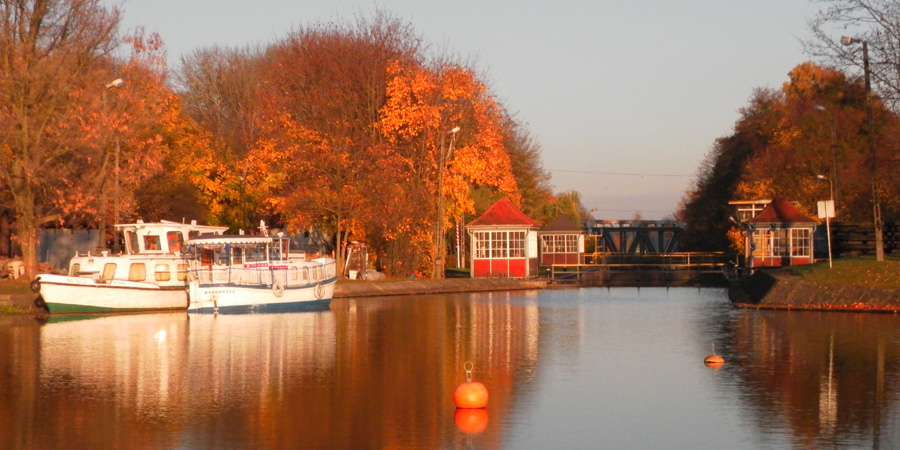 Bydgoszcz Canal was built in the years 1773-1774 as a part of the international waterway E 70. It connects the Vistula River and the Odra River through their tributaries: the Brda River, the Notec River and the Warta River. The establishment of Bydgoszcz Canal has contributed to the dynamic development of the city.

The modern hydrotechnical devices have been used. The combination of the industrial, residential and recreational buildings, has created the unique style of the city, its riverside identity and a status of one of the main centers of inland waterway transport.

In the years 1908-1915 New Canal was built, along with its unique locks located in Czyżkówko and Okole districts. It's equipped with expansion tanks that allow to save most of the water. At the beginning of the twentieth century the Canal was rebuilt. The new passage connected the Canal with Brda River from the city center. The former course was losing its important transport. But surroundings of the Old Canal became a place for walks and social events for enriching and growing community from the city centre. It was a habit for many well-mannered inhabitants to drink coffee in cafes or restaurants located at Canal. After Second World War, social life at the Old Canal disappeared. In the seventies, its main section was buried in the city center. Antique locks began to disintegrate and the river transport deteriorated.
Bydgoszcz Canal has revived recently. Nowadays, the old section of Bydgoszcz Canal with its five locks and a beautiful park is used mainly for recreation. The surroundings of the Old Canal are well maintained. The historic locks have been renovated. The restaurant "Przy IV Śluzie" located in the "Park Hotel" refers to a romantic pre-war tradition.
We recommend a stroll over the Canal. It is a place where you can move in time and hear the voices of people who spend their lives there. With a little bit of imagination, you will be able to see the boats and rafts. The Bydgoszcz Canal Museum is situated nearby. There, you can find mementos of those interesting times.