The Fara Cathedral, the Shrine of Our Lady of Beautiful Love 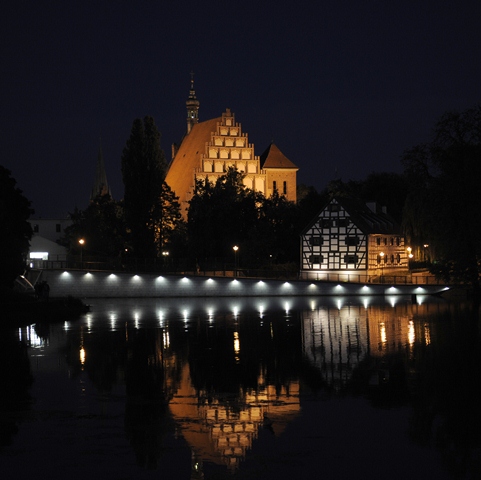 The Fara church in Bydgoszcz was raised to the rank of cathedral of the Bydgoszcz Diocese in 2004, by decree of Pope John Paul II. However, for tens of generations, for centuries, it was the only and most important church in the city - the Parish Church. The history of Fara is closely intertwined with the history of the city of Bydgoszcz. Although there were earlier churches, which do not exist anymore, such as St. Giles and the castle chapel, they date back to a time when Bydgoszcz was not yet a city.
Every European city had to have its own church. In addition to monasteries, castle churches and pilgrim churches, there had to be one town church, the Parish Church. After Bydgoszcz was granted city rights on 19 April 1346, the construction of the Parish Church began in the immediate vicinity of the market and the Town Hall. This was also the principle and tradition of other European medieval cities, a close encounter between the Sacred and the Profane. 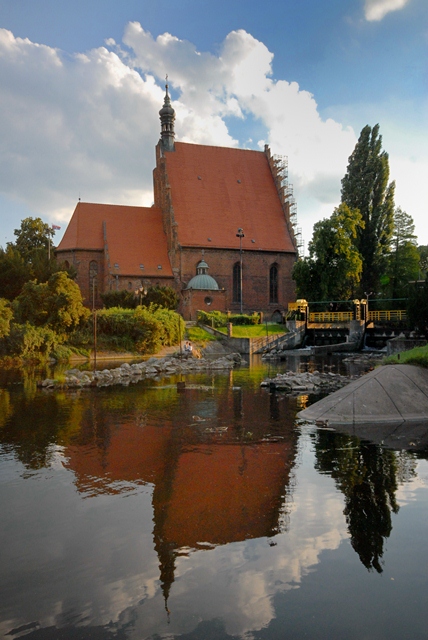 The Fara church (and much later Cathedral) was originally made of wood. However, the fifteenth and sixteenth century were a period of extraordinary growth and economic prosperity in Bydgoszcz and other Polish cities. In Bydgoszcz this prosperity was based mainly on trade: grain, wood, crafts and local products, including the famous Bydgoszcz beer, known even in the Hanseatic Gdansk. So, also after many fires and as a symbol of gratitude, it was decided to replace the wooden church with a stately Gothic brick church. 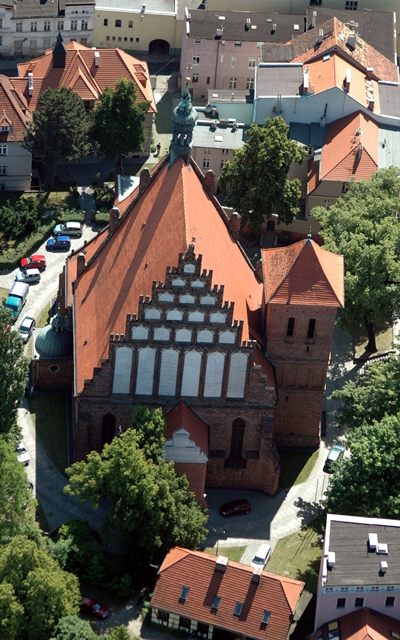 Construction lasted from 1466 to 1502, which was a long time. However, keep in mind that for the people of the Middle Ages a temple was not merely a building. It was also a symbolic "prayer of stone", so the building process was a matter of utmost importance. 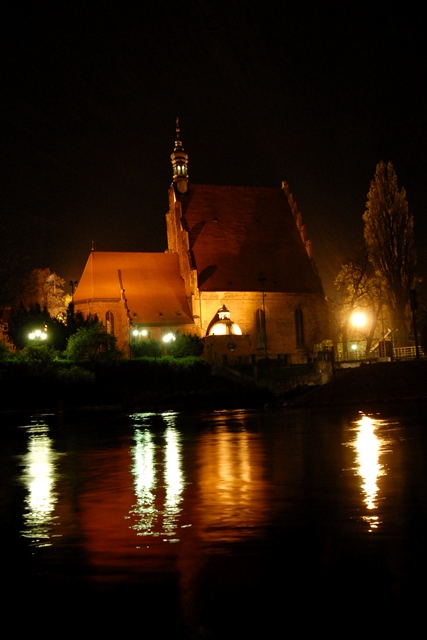 St. Nicholas and St Martin were chosen as patron saints of the parish as they were the patron saints of trade and craft and best suited the economic aspirations of the city.
The Gothic exterior brick walls show signs of defunct chapels funded by a variety of brotherhoods. Recent renovations over the southern entrance area revealed a Gothic polychromatic ornamental frieze. 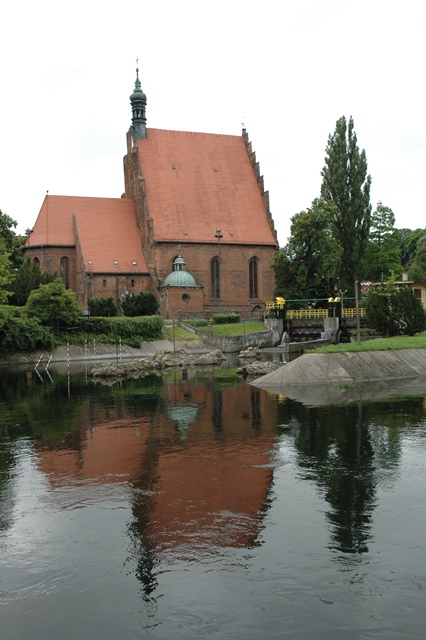 Inside, a surprising wealth of colors, not common in the northern regions of Poland. The murals are not very old. They come from 1922-1925 and are made by Henryk Jackowski following Stefan Cybichowski's project. These rich decorative paintings, created in the spirit of the late nineteenth century and the early decades of the twentieth century, are often compared to the old churches of Krakow: Matejko's works inside St. Mary's Church, Wyspiański's and Mehoffer's in the Franciscan Church and the whole of Wawel Cathedral. It is known that the figures of saints and angels are based on artists' acquaintances, including former mayors of Bydgoszcz, merchants and activists, their wives and daughters. 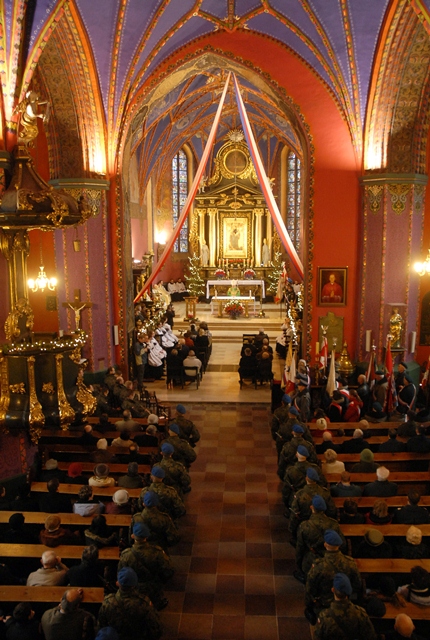 The interior retains the rich, mainly eighteenth-century Rococo furnishings, some of which come from the now defunct Carmelite convent: the exquisite choir stalls in the chancel and the benches where monks prayed for centuries on the other side of the Brda River (now the Carmelite convent has been replaced by a park and the Opera Nova parking lot). Among other features worth mentioning are the altars, stalls, the pulpit, epitaphs, paintings, numerous plaques, and the brass, late Renaissance baptismal font sponsored by mayor Wojciech Łochowski in 1611.

However, the most important monument in the Fara Cathedral, and at the same time a particularly valuable object of religious worship is the Madonna with the Rose. The picture on the main altar attracts much attention from the faithful, but also tourists. This is a beautiful late Gothic painting of the Madonna and Child, who, with an elegant courtly gesture, is holding in her other hand a tiny, barely blooming rose. For her, a small rosarium was built by the south wall of the chancel, in which different species of roses are blooming, designated mainly for newlyweds. Our Lady of Beautiful Love, as it is officially called, lends the Fara Cathedral the specific atmosphere of a blessed shrine. Interestingly, an almost identical image of the Madonna can be found in the famous cathedral of St. Stefan in Vienna. An identical copy of the Madonna with the Rose was presented to Pope John Paul II during his visit in Bydgoszcz on 7 June 1999. 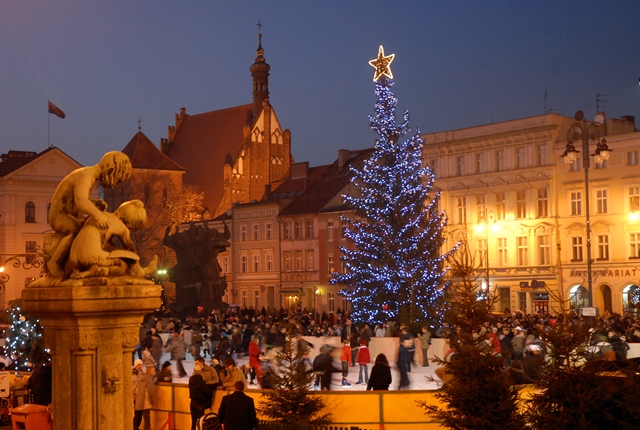 And one more insignificant detail on the south wall of the temple. High up, by the gutter, a small eagle with a crown is embossed on a plate. During the occupation, it was the only one overlooked by the Germans. Young Poles in middle-school caps used to come here to secretly salute the emblem.